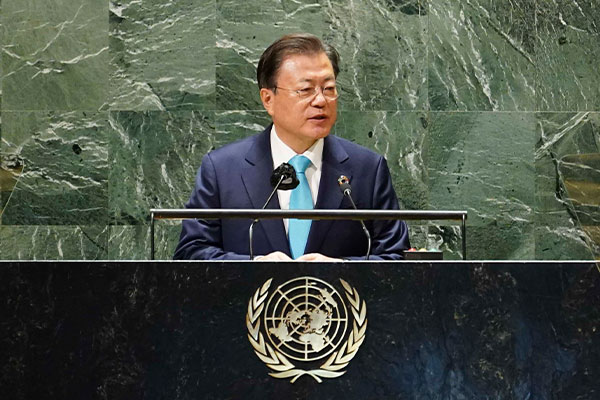 President Moon Jae-in has called for equitable access and distribution of COVID-19 vaccines at the first official event of the UN General Assembly under way in New York.

Attending the Sustainable Development Goals(SDG) Moment event on Monday local time, Moon said that when humanity transcends national boundaries to work together, that is the first step towards surmounting a crisis.

Mentioning the SDGs the UN adopted in 2015, Moon said such strides towards an inclusive future were held back by COVID-19, but ironically it was the pandemic that keenly brought home the desperate need for them.

Moon said countries must move beyond simply overcoming the crisis and build back better and stronger, with the commitment to inclusion and mutual prosperity immediately put into action.

The South Korean leader said that action can begin with equitable vaccine access and distribution, noting that South Korea made a 200-million-dollar-pledge to the COVAX Advance Market Commitment. Moon added that the country is also committed to making continued endeavors to expand vaccine supply and support.

He also vowed to join global efforts to respond to climate change and the digital divide.

In his keynote speech at the UN General Assembly taking place early Wednesday, Korea time, President Moon is expected to talk about Seoul's efforts to establish peace on the Korean Peninsula and ask for international support.
Share
Print
List