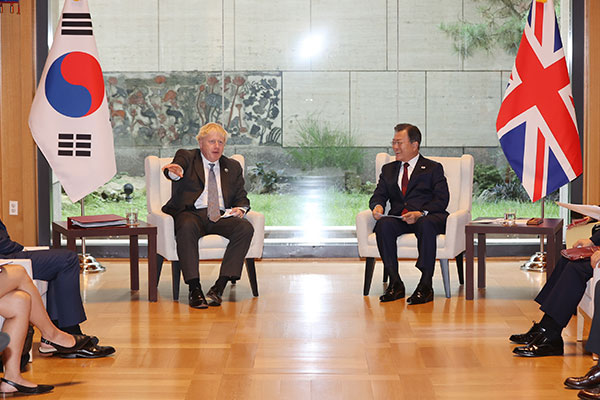 President Moon Jae-in held summit talks with the leaders of the U.K. and Slovenia on the sidelines of the UN General Assembly in New York.

In talks with British Prime Minister Boris Johnson on Monday, Moon briefed his counterpart on Seoul's push for denuclearization and lasting peace on the Korean Peninsula and requested continued support.

Moon said North Korea's recent missile launches come at a time when stability is called for in the region and that the concerned parties must stably manage the situation and work toward a quick resumption of dialogue.

Johnson reaffirmed his country's support for the peace drive and agreed to cooperate in efforts to engage with North Korea.

He also congratulated Slovenia on assuming this year's presidency of the EU Council and welcomed its plan to open an embassy in Seoul.