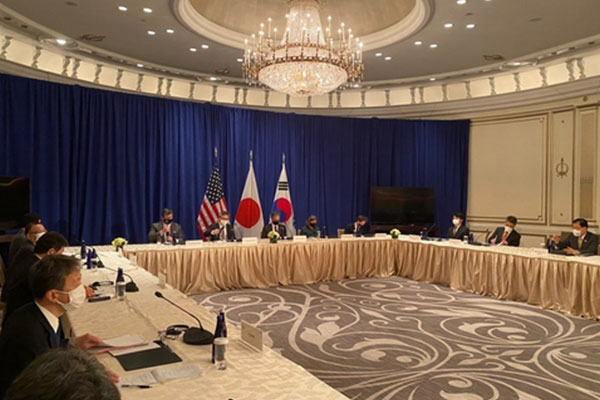 The top diplomats from South Korea, the U.S. and Japan on Wednesday met on the sidelines of the United Nations General Assembly in New York, where North Korea was a major topic of discussion.

Addressing the UN General Assembly on Tuesday, President Moon Jae-in proposed that the two Koreas, the U.S. and possibly China declare a formal end to the Korean War that finished in a 1953 armistice.

Asked about Pyongyang's nuclear and missile programs, as well as Moon's proposal, Chung said the issues were discussed.

Seoul's Foreign Ministry said the three sides assessed the recent situation on the Korean Peninsula and agreed to strengthen diplomatic efforts to achieve actual progress for complete denuclearization and permanent peace on the peninsula.

While the State Department did not specify the declaration following the meeting, Pentagon spokesperson John Kirby said earlier that the U.S. is open to discussing the matter in seeking to engage with the North.

U.S. Ambassador to the UN Linda Thomas-Greenfield also attended the trilateral meeting, suggesting that sending humanitarian aid to the North may also have been discussed.
Share
Print
List