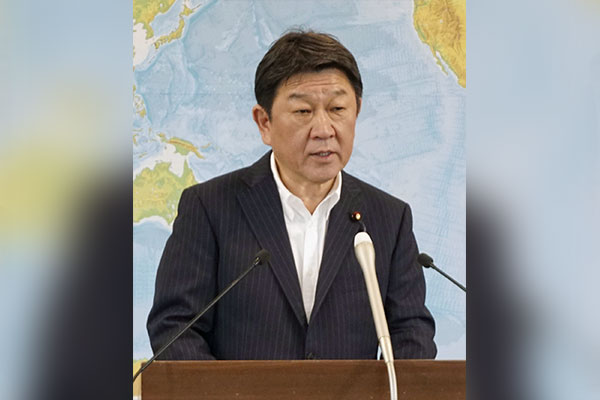 Japan’s Foreign Minister Toshimitsu Motegi expressed deep regret over a South Korean court ordering the sale of Mitsubishi Heavy Industries’ assets in the country in relation to a case of wartime forced labor.

Motegi made the remark during a news conference on Tuesday, adding that Tokyo protested the move to the South Korean government earlier on Monday.

He said Tokyo summoned an official from the South Korean Embassy in Japan and requested that Seoul immediately take appropriate measures, including a call for a solution that Japan can accept.

The minister said Japan had repeatedly conveyed to South Korea that the sale of Japanese firms’ assets must be avoided as it could seriously impact bilateral relations. He said he had conveyed the stance when he met South Korean Foreign Minister Chung Eui-yong last Thursday.

On Monday, the Daejeon District Court ordered the sale of trademark rights and patent rights of the Japanese firm in the country, accepting the request by two plaintiffs in their 90s.

It marked the first time a South Korean court ordered the sale of a Japanese company's assets in relation to the issue of wartime forced labor.
Share
Print
List