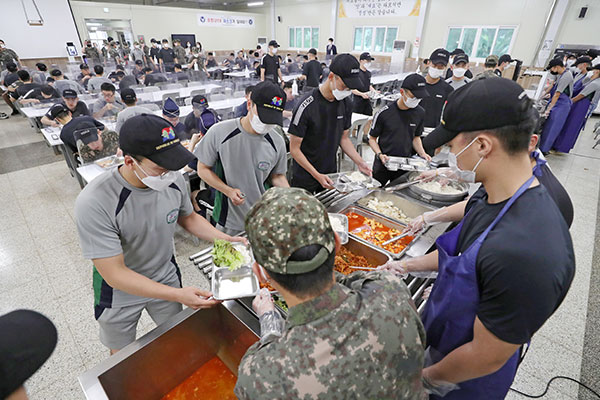 The South Korean military will revamp its mess hall system for service members, after it came under fire for the poor quality of meals currently provided.

According to the Defense Ministry on Thursday, the military will first draw up a meal plan based on service members' preferences, before purchasing ingredients through a bidding process, which will also include conglomerates.

While maintaining three-year private contracts with cooperative federations, contract volume will gradually decline to 70 percent of total in 2022, 50 percent in 2023, 30 percent in 2024, until all ingredients are obtained through bidding from 2025.

The military will also phase out private contracts with veterans or welfare groups, while  introducing separate support measures.

In order to ensure the safety of ingredients and  provisions, the military will also consider having service members take part in menu selection two to three months in advance.

The cost meals per day for each service member has been set at eleven-thousand won next year, up 25 percent from this year's eight-thousand-790 won.
Share
Print
List