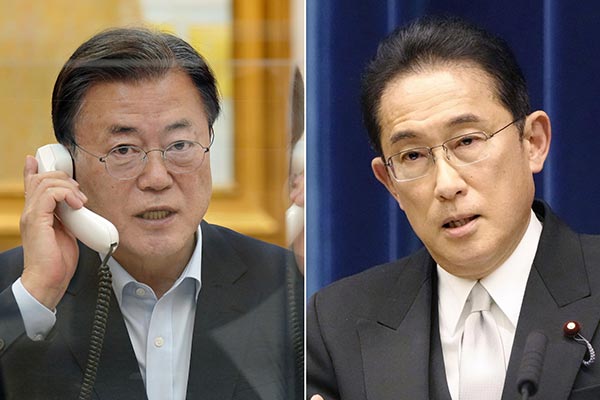 According to a statement from presidential spokesperson Park Kyung-mee, during the 30 minute conversation held from 6:40 p.m., Moon said bilateral relations were undergoing challenges due to a number of issues but they can be overcome through mutual efforts and determination.

Moon particularly noted the differences between the two countries in the legal interpretation of the 1965 treaty and called for efforts to explore a diplomatic solution.

Japan argues all colonial era reparation issues were settled under the treaty while the South Korean Supreme Court has ordered Japanese firms to compensate individual victims who filed lawsuits.

It's seen as unusual for President Moon to bring up the treaty in talks with the Japanese leader and is viewed as an effort to emphasize the need for a swift resolution.

Regarding the wartime sexual slavery issue, Moon said it's important to find a solution acceptable to the victims while not undermining diplomatic relations.

He noted that time is running short as only 13 registered Korean victims remain alive.

In response, Kishida explained Japan's stance on the wartime issues and agreed to accelerate diplomatic discussions.

The two also discussed North Korea, the Japanese abductees issue and cooperation in responding to the Covid-19 pandemic.

The phone call came on Kishida's eleventh day in office. He has already held phone talks with leaders of the U.S., Australia, Russia, China, India and Britain.
Share
Print
List