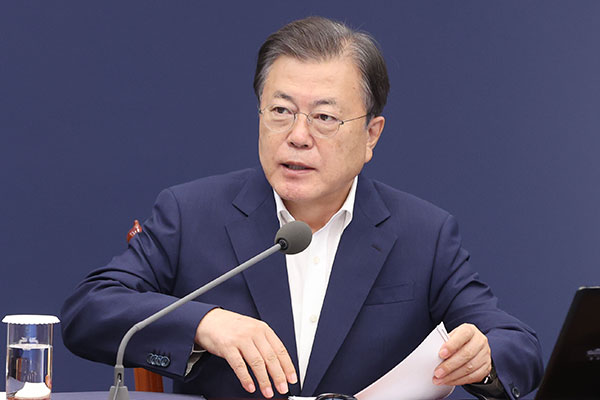 President Moon Jae-in urged officials to swiftly draw up a booster vaccination plan for those who have been inoculated with the Janssen vaccine, as its efficacy has been found to drastically decline over time.

Moon made the call at a meeting with his aides on Monday, following a recommendation by the U.S. Food and Drug Administration’s(FDA) advisory panel that booster shots be approved for the Janssen vaccine.

According to a study posted on the medRxiv website, vaccine efficacy among 620-thousand discharged U.S. service members who were fully vaccinated with one Janssen shot plunged from 88 percent in March to three percent in August.

In South Korea, around one-point-46 million people, mostly members of reserve forces and civil defense forces aged between 30 and 59, have received the Janssen vaccine since June.

Meanwhile, the president also called for preparations in patient transfers and outpatient treatment as at-home treatment is expected to surge amid a transition into the "With COVID-19" system.
Share
Print
List