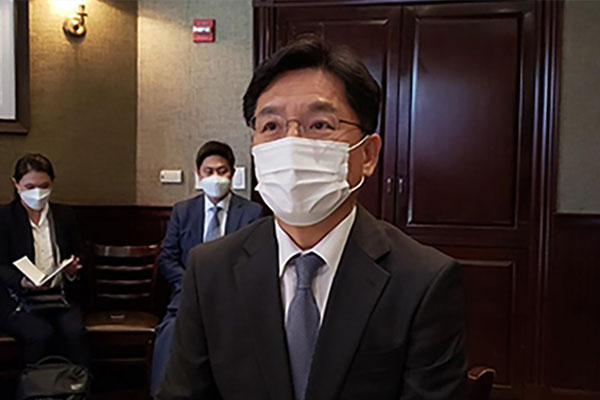 The nation’s top nuclear negotiator Noh Kyu-duk said he held sincere discussions with his U.S. counterpart Sung Kim at the working level on declaring a formal end to the Korean War.

Noh made the remarks to reporters on Wednesday upon returning home from Washington where he held bilateral talks with Kim and his Japanese counterpart Takehiro Funakoshi, as well as a trilateral meeting.

He said the issue is being discussed sincerely, adding that the working-level exchange followed ones between the South Korean and U.S. foreign ministers and national security advisers.

On North Korea’s latest test launch of a submarine-launched ballistic missile, Noh said the three parties jointly expressed concerns and agreed it is all the more imperative to resume dialogue with Pyongyang.

Noh said he will further discuss the topic of declaring a formal end to the Korean War with Kim during talks in Seoul this weekend.

Kim is scheduled to arrive in South Korea on Friday and meet Noh on Saturday.
Share
Print
List