'US to Continue to Work with S. Korea on N. Korea Issues' 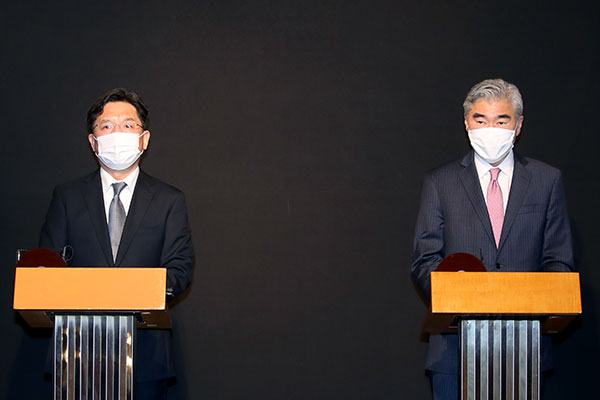 Kim issued the position on Sunday after a closed meeting with his South Korean counterpart Noh Kyu-duk at a hotel in central Seoul.

The U.S. top nuclear envoy told reporters that he looks forward to continuing to work with Noh to explore different ideas and initiatives, including Seoul's proposal of declaring a formal end to the Korean War.

Kim reaffirmed that Washington remains open to meeting with North Korea without any preconditions and holds no hostile intentions against the North, adding that it is awaiting on a positive response.

He also expressed concern about the North's recent missile launches, calling on the North to stop with the provocation and engage in dialogue.

Kim said that the missile launches were in violation of multiple United Nations Security Council resolutions and threatens its neighboring countries as well as the international community.

Noh said that the two sides held serious and in-depth discussions on the war-ending declaration, adding that the two nations agreed to hold additional consultations in the near future.
Share
Print
List