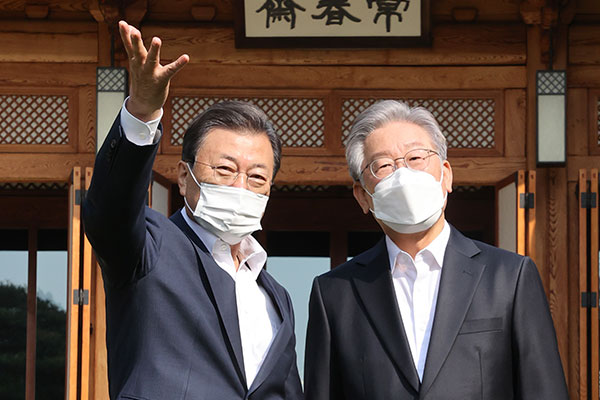 During the 50-minute meeting on presidential grounds, President Moon congratulated Lee for winning the DP primary and urged him to compete fairly while staying focused on developing good policies. He also stressed the importance of healing wounds and seeking party unity.

Lee, in response, said he considers himself a member of the Moon government who worked as the governor of Gyeonggi-do. He assessed President Moon as having successfully upheld the party's core values, namely the people's livelihoods, reform and peace -- a legacy Lee said he would work to uphold.

The two also shared views on pressing matters including economic recovery and climate change, but there was no mention of sensitive political issues such as the Seongnam land development scandal.

When asked about whether the president will meet with the nominees from opposition parties, the top office said it remains open to the possibility.
Share
Print
List