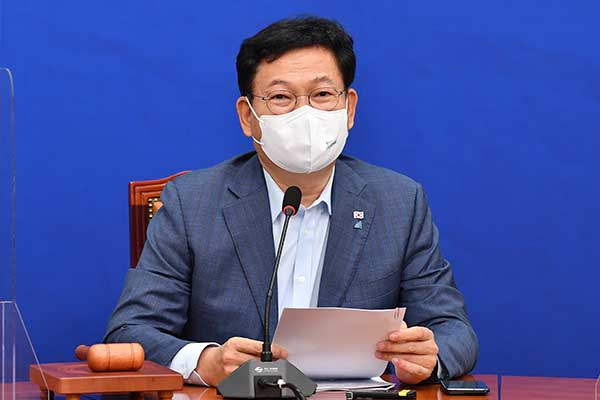 Ruling Democratic Party chairman Song Young-gil has floated the idea of changing a law to block former President Chun Doo-hwan from being given a state funeral.

At the funeral altar of the late President Roh Tae-woo on Wednesday, Song told reporters Chun has yet to show remorse for his past misdeeds, despite being convicted of murder perpetrated for the purpose of an insurrection. He said Chun continues to defame Gwangju as he undergoes trial.

Regarding some public opposition to holding a state funeral for Roh, Song said the Cabinet reached the decision as President Moon Jae-in spoke of the late leader's faults and also his accomplishments and contributions to the country such as hosting the 1988 Seoul Olympics.

The ruling party chief said the bigger issue lies with former President Chun regarding how protocols may apply related to his conviction and court ruling.

Song said Chun cannot be laid to rest at the national cemetery, while a decision on a state funeral can be debated.
Share
Print
List