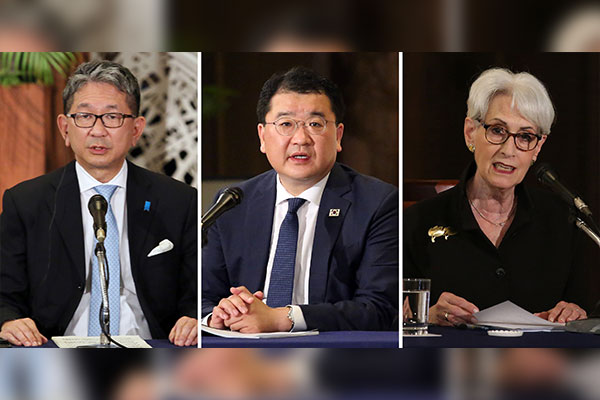 First Vice Minister of Foreign Affairs Choi Jong-kun said a joint news conference scheduled for Wednesday did not take place after Japan conveyed its intent to back out due to a visit to the South Korean islets of Dokdo by the head of the Korean National Police Agency.

Choi told reporters in Washington that Japan had conveyed the stance ahead of a meeting of vice foreign ministers of South Korea, the U.S. and Japan.

Choi said South Korea agreed to allow the U.S., as host of the three-way meeting, to hold a news conference on its own to announce the results of the meeting.

Choi and his U.S. counterpart Wendy Sherman and Japanese counterpart Takeo Mori were initially set to hold a joint news conference following their meeting but only Sherman took part.

Earlier on Tuesday, Kim visited Dokdo and Ulleung Island via helicopter for an inspection and to convey words of encouragement to officers guarding the easternmost islets. It was the first time in 12 years that the head of the national police agency visited Dokdo.
Share
Print
List