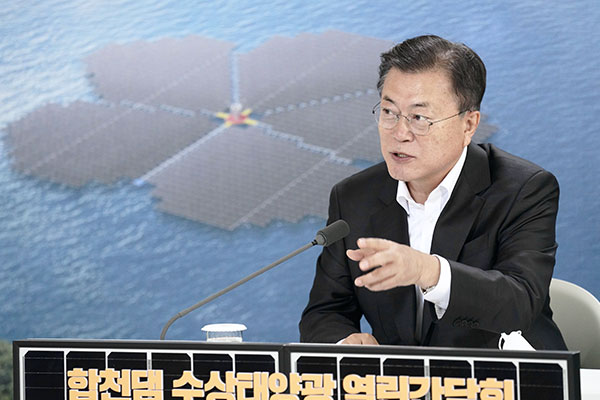 President Moon Jae-in underlined the importance of floating solar power plants on Wednesday in a ceremony marking the launch of operations of a facility on Hapcheon Dam in South Gyeongsang Province.

Moon said solar energy is being viewed as the most important renewable energy source, adding that the new plant has the potential to produce nine-point-four gigawatts of energy, equivalent to power generated by nine nuclear power plants.

He stressed that floating solar power farms can play a pivotal role in energy transition policies focused on reducing reliance on coal-powered plants and nuclear power, and raising it for new renewable energy.

The president added that the government will pursue more projects similar to the Hapcheon Dam plant, saying the projects would focus on preserving the existing functions of dams. Also, they would be pursued with local residents’ participation from the very first steps so that profits can go back to residents.

Moon predicted that these efforts would contribute to the government’s plans to achieve zero net emissions by 2050.

The latest floating solar power plant is the tenth largest in the world. Hapcheon Dam was the first in the world to commercialize floating photovoltaic power generation.
Share
Print
List