Foreign Minister: Tragedy of Japan's Wartime Sexual Slavery Must Not Be Forgotten 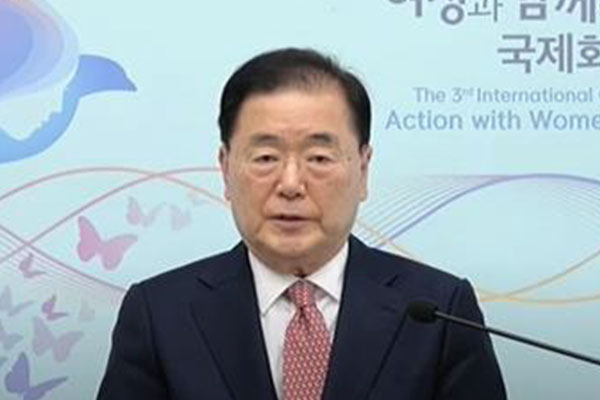 Foreign Minister Chung Eui-yong said he is duty bound to help recover the dignity of the surviving victims of Japan's wartime sexual slavery and to ensure that such tragedies never recur.

During his opening speech at the Third International Conference on Action with Women and Peace on Thursday, Chung criticized that it's unethical for perpetrators to deny the truth and wait for their acts of shame to be forgotten.

Citing his conversation with surviving victim Lee Yong-soo, the prime minister said a victim-centered approach is the only way to heal their wounds and restore their dignity.

He assessed that late victim Kim Hak-sun's courageous testimony on the horrors of Japan's sexual slavery, which was the first, has encouraged other victims to come forward, leading to global support.

Chung also said that it's regrettable to see such acts still happening in many corners of the world, raising concerns over the growing risks of sexual violence during conflict in Afghanistan and Myanmar.
Share
Print
List