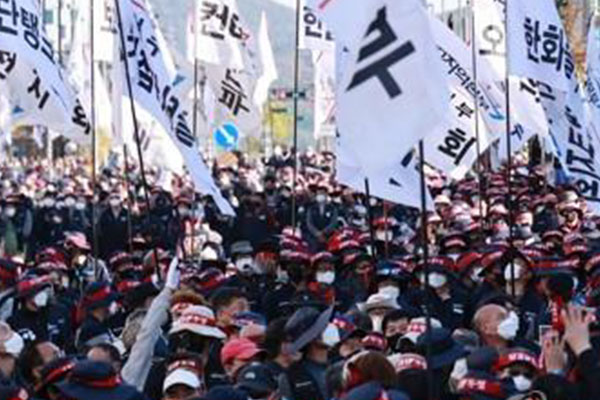 With unionized cargo truckers launching a three-day general strike on Thursday, the government concluded later in the day that no major disruptions stemming from the walkout have yet to occur.

The Ministry of Land, Infrastructure and Transport shared its assessment on Thursday afternoon, saying some five-thousand-80 people, or 23 percent of the members of the cargo solidarity headquarters, were estimated to be taking part in the collective action.

The ministry said, aside from reports of minor scuffles, there was no major clash between the demonstrators and the police as of yet.

Operation at all 11 ports across the nation remained normal, with the average container stacking ratio for the ports standing at 73 percent, similar to the usual average of 73-point-five percent.

The labor group, belonging to the Korean Confederation of Trade Unions(KCTU), is demanding a continuation of the so-called safe wages scheme which imposes fines on shipping firms that do not pay truck drivers an adequate amount in freight fare despite the government’s plan to end the three-year arrangement next year.
Share
Print
List