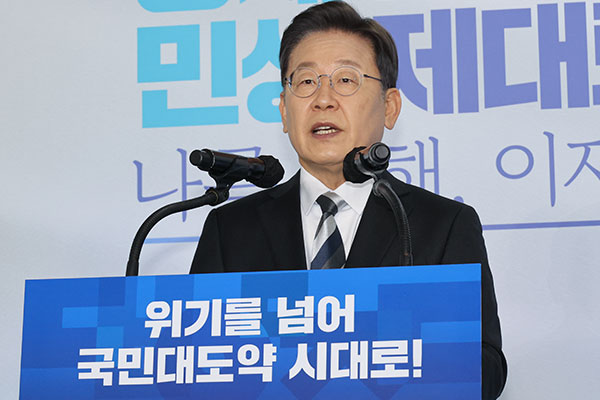 In a New Year's press conference, ruling Democratic Party(DP) presidential nominee Lee Jae-myung has called on the National Assembly to fast track an extra budget worth 30 trillion won to ultimately support small businesses amid the pandemic.

Lee gave a New Year's address at a Kia car plant in Gwangmyeong, outside of Seoul, on Tuesday, a site that holds symbolic significance for the nation's auto industry as well as the Asian financial crisis of 1997.

The presidential candidate said he believes the urgent financial assistance - with determination - can be drawn up prior to the Lunar New Year holiday, which begins on January 31 this year.

Lee assessed a supplementary budget of 25 to 30 trillion won would be a feasible range, which can be used to ensure a minimum cumulative one million won in "consumption coupons" is given to each eligible consumer. He added this would still fall short of other economies' relief payouts through last year.

The candidate promised increased COVID-19 relief and investment into the development of a vaccine and treatment. In tackling low growth and the widening gap, Lee proposed expanding state income, housing and financial support for fair growth.

On the climate crisis, the candidate pledged to lay the foundation for a carbon neutral society through construction of an energy highway run by solar and wind energy.
Share
Print
List