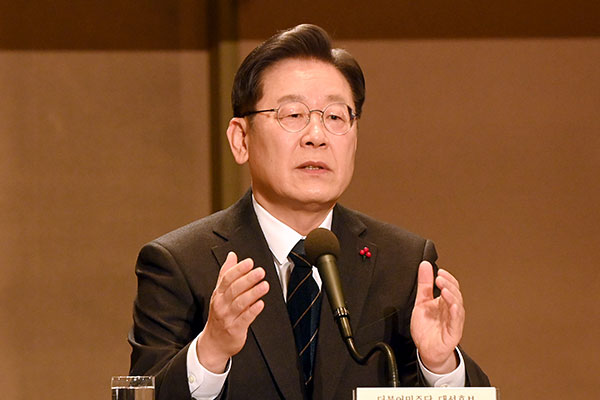 Ruling Democratic Party(DP) presidential candidate Lee Jae-myung has pressured the finance ministry to cooperate as the ruling party is set to begin deliberations on a supplementary budget focused on COVID-19 relief.

In an interview with Yonhap News TV on Tuesday afternoon, Lee said he suspects the finance ministry is making political judgments on its own, apparently referring to its previous refusals of calls to draft or increase the supplementary budget.

The candidate argued that appointed powers under the administration should follow the elected president’s orders but currently the command system is upside down and needs to return to normal.

Noting that he frequently hears of the ministry’s reluctance to comply with other ministries, the prime minister, the president or presidential office, Lee said it makes him wonder whether it is in tandem with the democratic principle of the sovereignty of people.

That same day, the DP candidate called for an extra budget of up to 30 trillion won to provide the general public with consumption coupons as a way of ultimately supporting small businesses amid the protracted pandemic.

DP floor leader Yun Ho-jung is scheduled to preside over a series of meetings with ranking party members on Wednesday to discuss a possible extra budget bill.
Share
Print
List