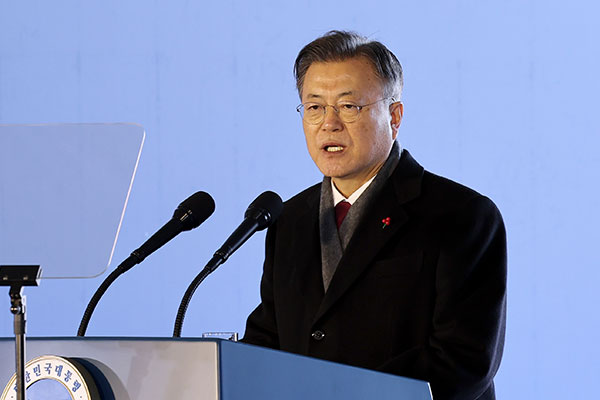 President Moon Jae-in attended the groundbreaking for a rail line along the eastern coast that will link to North Korea, where he reaffirmed his will to achieve peace and prosperity on the Korean Peninsula.

He attended the event three hours after North Korea had test-fired a projectile, believed to be a ballistic missile, into the East Sea on Wednesday.

Referring to the launch, the president in an address said that dialogue must continue to overcome such situations. He said peace on the peninsula won't come automatically, adding that it will happen suddenly when the two Koreas jointly make an effort and build trust.

The completion of the railroad between the eastern city of Gangneung and Jejin Station in Goseong County, Gangwon Province, is expected to connect the coastal railway to North Korea.

Under a 2002 inter-Korean deal, Jejin Station was linked to the North's Gamho Station in 2007. The presidential office said once this portion is complete, the joint railway network will become a gateway to Eurasia.
Share
Print
List