Moon to Leave for 3-Nation Middle Eastern Tour on Saturday 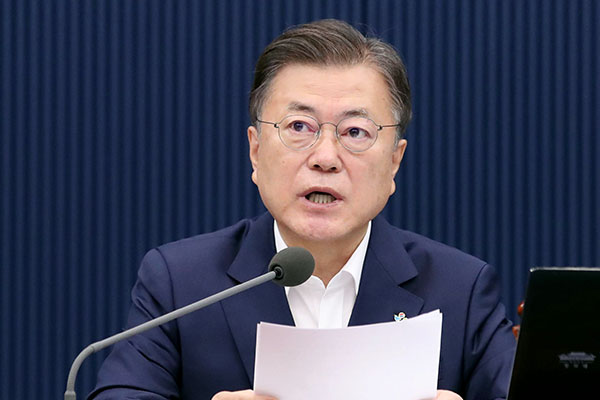 President Moon Jae-in will embark on an eight-day Middle Eastern tour later this week, during which he will visit three countries.

His spokesperson Park Kyung-mee said Monday that Moon will visit the United Arab Emirates, Saudi Arabia and Egypt from January 15 to 22.

On Sunday, President Moon will attend a round table meeting with business people from both countries in Dubai. He's also scheduled to take part in a Korea National Day event at the Dubai Expo.

On Monday, he will sit down with Mohamed bin Zayed Al Nahyan, the Crown Prince of Abu Dhabi to discuss bilateral relations.

In the following two days, Moon will be in Saudi Arabia to hold talks with Crown Prince Mohammed bin Salman and to attend a business forum.

He will then make a state visit to Egypt at the invitation of President Abdel Fattah Al-Sisi and discuss cooperation on sustainable growth.

Park said Moon's visit will serve to solidify cooperative ties not only in the traditional areas of energy, construction and infrastructure but also in promising future sectors such as public health, science, hydrogen and climate.
Share
Print
List