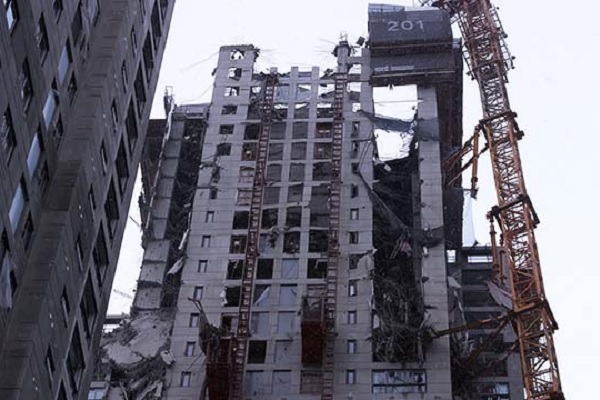 Six construction workers remain missing after the exterior walls of a high-rise apartment building under construction in Gwangju collapsed on Tuesday.

According to the police and anti-disaster authorities in the southwestern city on Tuesday, the collapse occurred at the construction site of the Hyundai IPark complex in Hwajeong-dong at 3:46 p.m.

A total of 394 workers were at the scene and three on the ground were rescued out of debris that fell from the 39-story building. Six others, who were presumed to be working on the 28th to 31st floors, remain missing. Around ten vehicles were also buried under rubble.

The search for the missing workers will continue after the area is deemed safe.

The outer walls of the 23rd to 34th floors crumbled while concrete was being placed on the rooftop. Police believe a gang form and tower crane being used malfunctioned, causing the collapse.

The developer of the complex is HDC Hyundai Development Company, which also oversaw the construction of another building that collapsed in Gwangju last year, killing nine people.
Share
Print
List