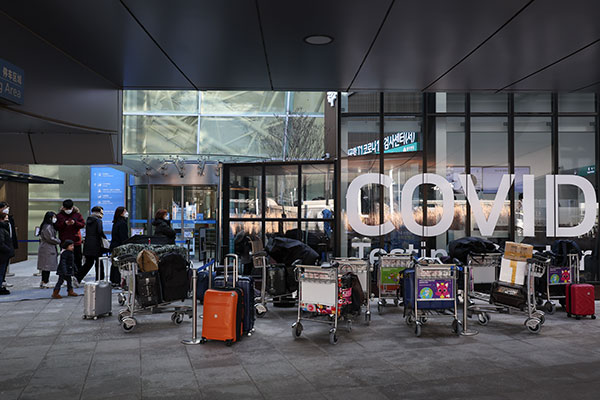 Health authorities reported the largest number of daily COVID-19 cases from overseas to date on Wednesday as the highly contagious omicron variant spreads around the world.

The Korea Disease Control and Prevention Agency(KDCA) said four-thousand-388 new cases were compiled throughout Tuesday, bringing the total to 674-thousand-868.

It is up nearly 13-hundred from Tuesday largely due to fewer tests on the weekend but compared to a week earlier, it is over 50 fewer. Compared to two weeks ago, the figure is down over one-thousand cases.

Of the latest figure, four-thousand-seven were local transmissions while the number of infections among new arrivals from overseas stood at a record high of 381.

It marks only the second time the foreign inflow topped 300 since the pandemic began, with the previous record high of 309 recorded on July 22 last year due to a cluster on a South Korean destroyer on an anti-piracy mission off the coast of Africa.

Around two-thirds of the latest overseas cases, or 252, arrived from the U.S.

Meanwhile, the number of critically ill patients is down by 31 to 749, remaining below 800 for the third consecutive day.

As of 5 p.m. Tuesday, the ICU occupancy rate for COVID-19 patients stood at 41-point-four percent nationwide, down three-point-five percentage points from the previous day.