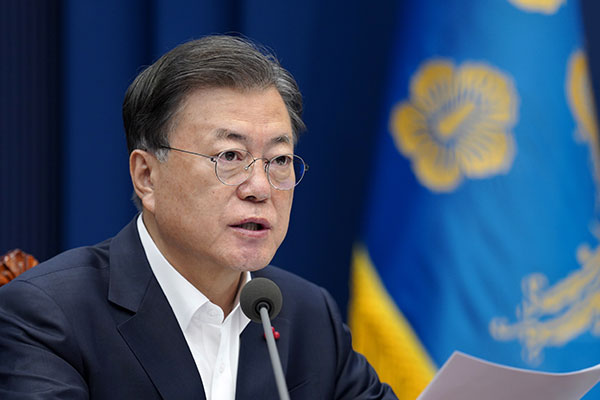 President Moon Jae-in has reiterated his call for the public to get booster shots against COVID-19, saying a big hurdle remains with the upcoming Lunar New Year holiday.

At a luncheon with religious leaders at his office on Wednesday, Moon said there is a likelihood omicron infections will hit full swing when it coincides with the annual holiday that runs from January 31 to February 2.

Citing overseas cases including that of Japan, Moon noted that, though the rate of critical cases involving the variant appears relatively lower, once it becomes the dominant strain, its spread accelerates explosively within a short period of time.

Emphasizing that the number of critical and fatal cases in the fourth wave slowed once seniors received their booster shots, the president said omicron's impact will depend on how many adults under 50 get their third shots.

Moon then urged the religious community to help ease public anxiety over vaccine side effects, and for the nation to overcome the fight against the variant through working-level dialogue with the government.
Share
Print
List