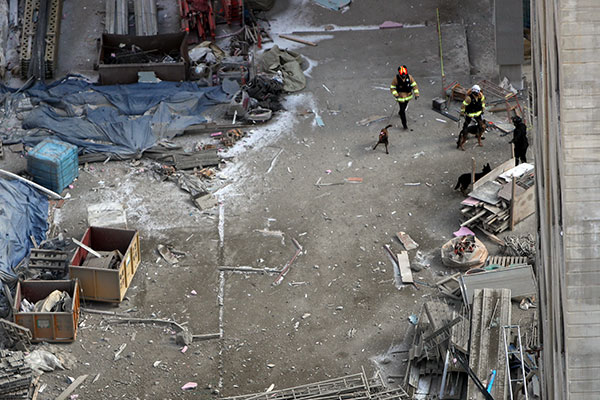 A search for six missing workers has resumed at a construction site in the southwestern city of Gwangju, where the outer walls of a high-rise apartment building collapsed Tuesday.

The resumption comes after a 13-hour stall, during which a safety inspection took place.

In a briefing Wednesday, Gwangju Mayor Lee Yong-seop said that six rescue dogs and their handlers were let into the site at 11:20 a.m.

Lee said the identities of the workers were verified Tuesday evening, but experts voiced concern that a search operation late at night without safety checks could lead to another accident.

According to the mayor, drones were flown early Wednesday morning to inspect the site from underground all the way up to the 39th floor. Inspectors gave clearance for the search to continue inside the building.

Three workers were initially rescued in the incident, with one sustaining injuries. The six that are missing are believed to have been on the upper floors of the building.
Share
Print
List