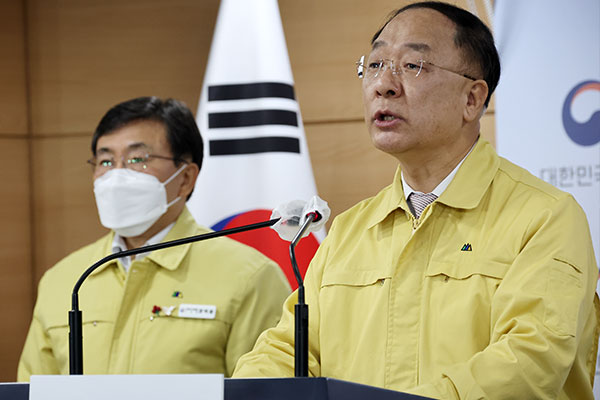 The government plans to draw up a supplementary budget worth 14 trillion won to further help small businesses hit hard by the COVID-19 pandemic.

Finance Minister Hong Nam-ki said in a briefing in Seoul on Friday that through the extra budget, the government will dole out an additional three million won each to small business owners who’ve suffered a decline in sales to help lessen their burdens in paying rent and labor costs.

The funds will add up to ten trillion won and will be in addition to the one million won relief offered to small businesses in December.

Much of the funds will be financed with excess tax revenue, estimated at ten trillion won. The government, however, will first issue debt-financing bonds as excess tax revenue can only be used after the previous year's accounts are settled in April.

The government plans to finalize the budget plan next week before submitting it to the National Assembly the last week of this month.

This comes after President Moon Jae-in on Thursday ordered the government to draw up measures to use excess tax revenue for relief grants.
Share
Print
List