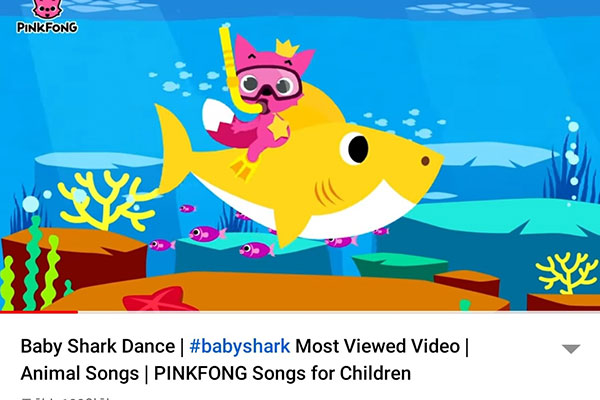 The “Baby Shark Dance” video has become the world's most viewed video on YouTube of all time as well as being the first to surpass 10 billion views.

Creator The Pinkfong Company announced the milestone on Thursday.

The video featuring dance moves to the addictive children’s song “Baby Shark” was uploaded on YouTube in June 2016 and went on to set a Guinness World Record as the most viewed video on YouTube in November 2020.

The video reached the ten billion view milestone at around 4 p.m. Thursday. It has drawn around two-point-three billion more views than “Despacito” by Luis Fonsi and Daddy Yankee, which is the second-most viewed video on YouTube.

The Pinkfong Company CEO Kim Min-seok vowed the company will continue to create content loved by fans around the world and lead a culture in which one content can be enjoyed by all family members.
Share
Print
List