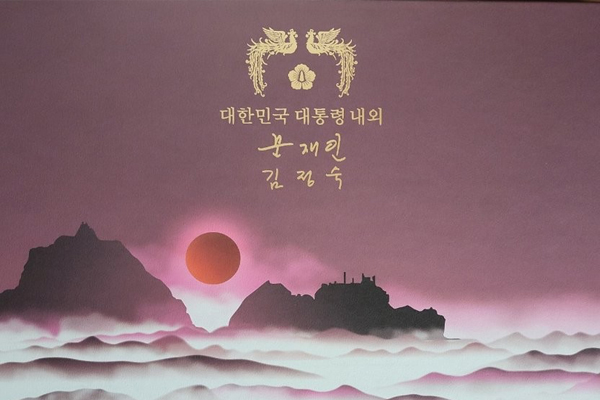 The Japanese Embassy in Seoul has refused to accept President Moon Jae-in's Lunar New Year gift, taking issue with the image of the Dokdo islets on the gift box.

Speaking to KBS on the phone on Saturday, an embassy official said it returned the gift President Moon sent to Ambassador Koichi Aiboshi after confirming that it bears an image that appears to be Dokdo.

The official said that in returning the gift, Japan voiced protested and conveyed its territorial stance on the islets.

The presidential office had sent gift boxes containing traditional liquor and chestnuts to foreign ambassadors stationed in the country ahead of the Lunar New Year holiday.

Illustrations on such holiday gifts change every year and this year's image of a Dokdo sunrise, the first sunrise that takes place in the country, is believed to represent South Korea's commitment to overcome the pandemic.

A presidential official told KBS the office can't confirm whether the gift has been returned and it has no particular statement to give on the issue.