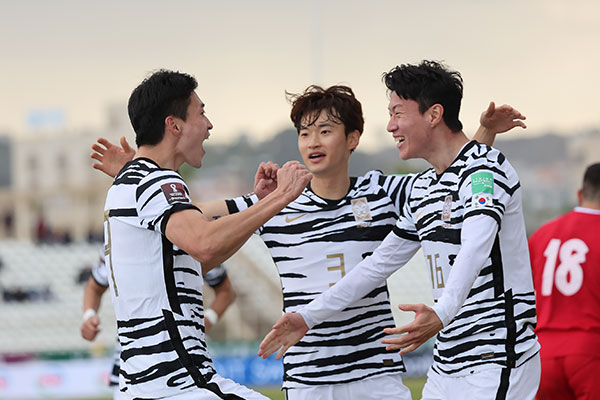 South Korea defeated Lebanon 1-0 in a World Cup qualifier on Thursday, moving closer to securing its berth for the 2022 World Cup in Qatar.

Cho Gue-sung scored the sole goal in the first half in the Group A match of the final Asian qualifying round for the 2022 FIFA World Cup at Saida International Stadium in Sidon, Lebanon.

With the victory, South Korea has secured 17 points total with five wins and two draws, keeping second place in Group A.

The top two in each of Asia's two groups are guaranteed to advance to the World Cup and South Korea is almost certain to win the berth, as it is ahead of the third-placed United Arab Emirates by eight points. Iran confirmed its top spot after beating Iraq 1-0 in Tehran.

South Korea will go up against fourth-placed Syria on Tuesday in Dubai. If it wins the game, it will secure its ticket to the World Cup.
Share
Print
List