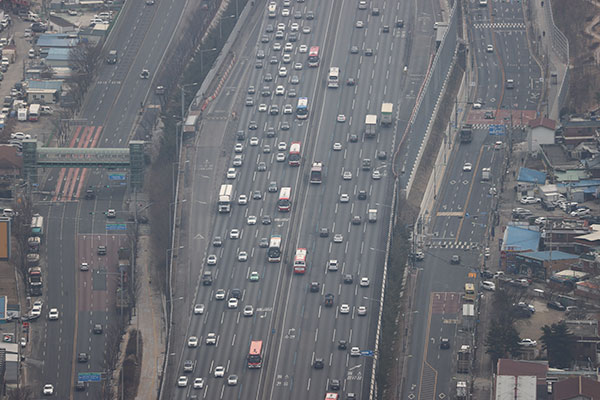 Expressways nationwide are starting to see congestion amid the Lunar New Year holiday exodus as streams of people hit the road to visit their hometowns.

The Korea Expressway Corporation expects some four-point-97 million vehicles to travel on Friday with 460-thousand leaving the greater metro area for regional areas and 450-thousand headed in the other direction.

As of 3 p.m., a trip to the southern port city of Busan from the Seoul tollgate will take five hours and 40 minutes, while the ride to Ulsan will take more than five hours.

Traffic heading south is expected to peak around 7 and 8 p.m. and start tapering out between 9 and 10 p.m. Northbound traffic will likely be congested the most from 5 to 6 p.m. and ease at around 8 to 9 p.m.

The Lunar New Year holiday runs Monday to Wednesday, and counting the weekend, is a five-day break in all.
Share
Print
List