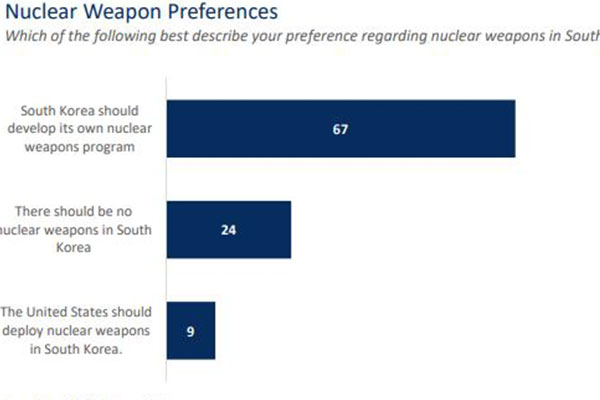 A new survey has found that seven out of ten South Koreans support the idea of South Korea developing its own nuclear arsenal.

A Hankook Research survey conducted on some 15-hundred citizens aged 18 or older between Dec. 1 and 4 showed that 71 percent of respondents supported South Korea developing its own nuclear weapons, while 26 percent opposed the idea.

The Chicago Council of Global Affairs, which commissioned the survey, revealed the survey findings on Monday.

The survey also found that 56 percent of those surveyed supported the deployment of U.S. nuclear weapons in the nation, while 40 percent were opposed.

On the question of which country poses the biggest threat to South Korea’s security, a plurality of respondents picked North Korea followed by China, Japan and the U.S.

When asked which country would be the biggest threat in ten years, however, 56 percent picked China followed by North Korea.
Share
Print
List