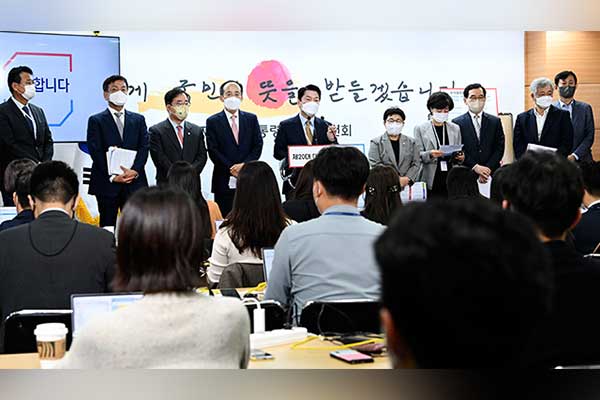 The presidential transition team has vowed to bolster the nation’s capacity to respond to North Korean threats.

The team unveiled such a pledge on Tuesday as it announced key policy goals the incoming government will pursue related to national defense.

The team said the Yoon Suk Yeol government will set up a three-pillar system to better respond to the North’s nuclear and missile threats. The three pillars will focus on fortifying its Kill Chain system aimed at preemptively striking the North’s nuclear weapons and missiles, the Korea Massive Punishment and Retaliation system which seeks to eliminate the North’s leadership in the event of contingency and the Korean Air and Missile Defense(KAMD) system.

The team also said it plans to create a strategic command center to effectively manage cyber warfare and space operations and promptly deploy a system for intercepting the North’s long-range artillery.

Meanwhile, the transition team did not include in the key defense policies plans to deploy additional Terminal High Altitude Area Defense(THAAD) anti-missile systems, which was one of Yoon’s campaign pledges.
Share
Print
List