Yoon Pledges to Rebuild Nation that 'Truly Belongs to the People' 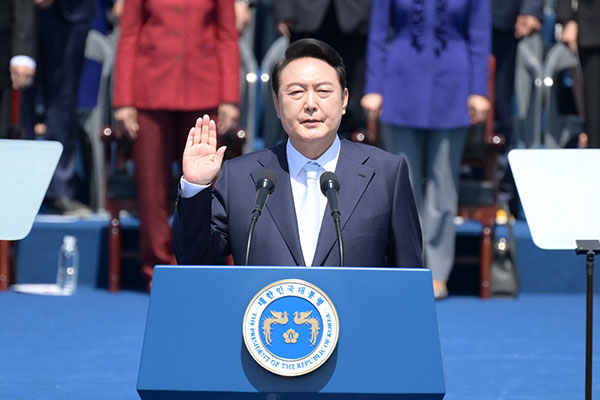 President Yoon Suk Yeol has pledged to rebuild the nation to truly belong to the people, based on a liberal democracy and the market economy.

At his inauguration ceremony in front of some 41-thousand people gathered at the National Assembly lawn on Tuesday, Yoon said he is responding to the call of the times to advance South Korea toward fulfilling its responsibility and role in the international community.

Citing the COVID-19 pandemic, global supply chain disruptions, climate change, food and energy shortages, low growth and societal polarization, Yoon pointed out that current politics have been rendered incapable of resolving them due to a democratic crisis.

The president assessed that anti-intellectualism, in which discord among different groups leads to the distortion of truth, threatens democracy. He then called on society to redefine the values of liberty to overcome such crises.

On economic growth, Yoon emphasized that only science, technology and innovation can offer opportunities for the country to make a leap forward and achieve rapid expansion.

Regarding North Korea, the president pledged to leave the door to dialogue open to seek a peaceful resolution to the North's nuclear development.

Should the regime take practical steps toward denuclearization, Yoon promised a bold plan in cooperation with the international community to support groundbreaking improvements in the North Korean economy and its people's lives.
Share
Print
List