Moon Thanks Supporters as He Embarks on KTX Ride into Retirement 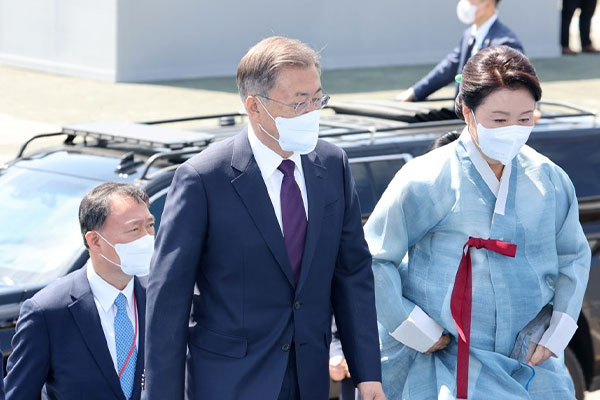 Former President Moon Jae-in has thanked the people for allowing him to be a happy president "until the very last moment."

He made the statement to a crowd gathered at Seoul Station on Tuesday, where he and former First Lady Kim Jung-sook were about to board a speed train towards their retirement home in the countryside of Yangsan, South Gyeongsang Province.

Earlier in the day, they had attended the inauguration of President Yoon Suk Yeol, in a completion of their official role.

Moon said he was moved by a spontaneous retirement event organized by his supporters on Monday evening, as he left the presidential complex for the last time. He extended his heartfelt gratitude, claiming that no other president in Korea's history has had such a beautiful end to their term.

Moon urged people not to be saddened by his departure. He said he felt liberated for becoming a common citizen again, without the need to constantly monitor the news. He said he looks forward to the freedom retirement will afford him, including the ability to allow his mind to fly freely.
Share
Print
List