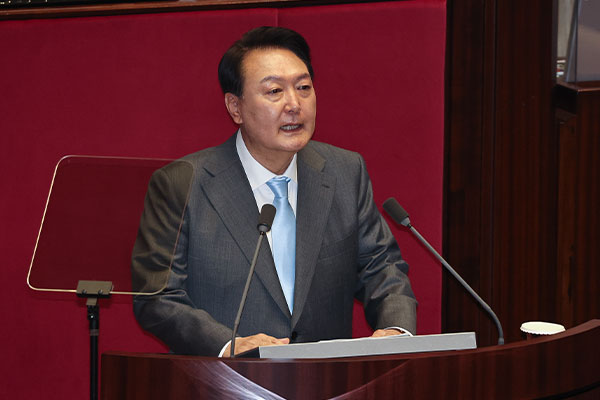 President Yoon Suk Yeol has called for parliamentary cooperation in passing the government’s 59 trillion-won supplementary budget plan, stressing that stabilizing the people’s livelihood was a most urgent task.

Yoon made the call on Monday during his first address of the National Assembly since taking office last Tuesday.

The president said bipartisan support was more necessary than ever to address the serious threats and challenges faced by the nation.

Yoon said the change in the global political economy has become a serious challenge for South Korea’s economy, whose growth has been driven by exports amid globalization. Additionally, small business owners and the socially vulnerable have suffered fatal blows due to damages that snowballed during the COVID-19 pandemic, the president said.

Yoon in his parliamentary address also stressed the need to revamp the nation’s pension, education and labor systems, saying the society's sustainability will face threats if efforts are not made now. He underlined that the government and the National Assembly must work together to promptly pursue such reforms.

On his upcoming summit with U.S. President Joe Biden, Yoon said he will discuss with Biden ways to strengthen cooperation in global supply chains through the Indo-Pacific Economic Framework(IPEF), a new U.S.-proposed economic framework for the region. He said he will also talk about the digital economy and carbon neutrality, among other key issues regarding the economy and security at the summit.