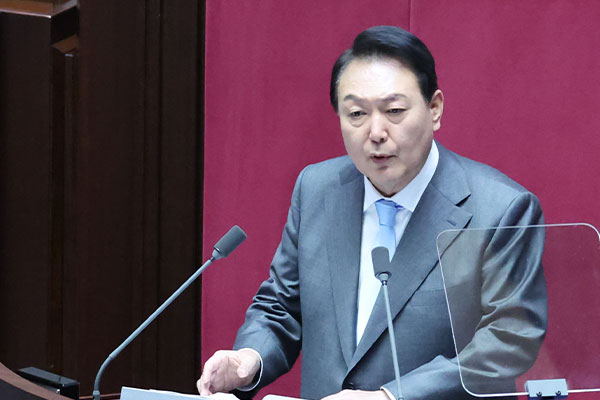 President Yoon Suk Yeol has asked leaders of the ruling and opposition political parties for their cooperation in approving his prime minister nominee Han Duck-soo.

Speaking to reporters on Monday, the ruling People Power Party(PPP) Chairman Lee Jun-seok said that Yoon made the appeal during a meeting with leaders of the PPP, the Democratic Party(DP) and the Justice Party. National Assembly Speaker Park Byeong-seug was also present at the session convened prior to his inaugural speech before the National Assembly.

Yoon is known to have stood firmly behind his choice for prime minister, saying that he evaluates Han to be the person most capable of facilitating cooperation between the ruling and opposition parties.

Meanwhile, the co-chair of the main opposition DP reportedly requested that the issues surrounding other nominees be resolved first, likely referring to the health and justice minister candidates, both of whom are facing various allegations of wrongdoing.

In South Korea, all Cabinet ministers are subject to a parliamentary confirmation hearing, but only the prime minister requires parliamentary approval.

DP members on the confirmation hearing committee had declared Han to be "unqualified," citing his post-retirement career at a law firm among other allegations.
Share
Print
List