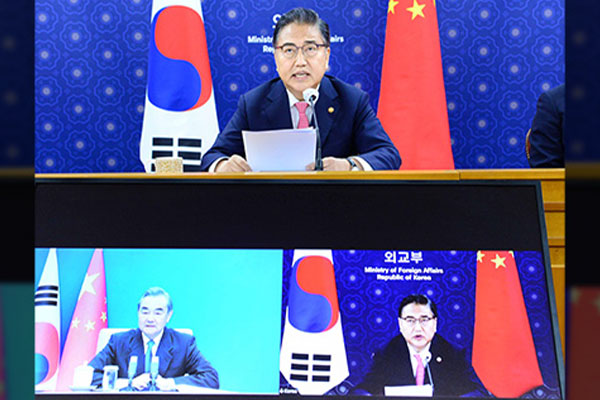 The top diplomats of South Korea and China held talks to discuss relations between the two nations and the Korean Peninsula issues.

In the first talks between the top diplomats of the two nations since the launch of the Yoon Suk Yeol government, Park and Wang exchanged opinions on the peninsula situation.

According to the ministry, Park said that North Korea's advancement in nuclear and missile capabilities worsens the situation on the peninsula and in the region, and hoped that Seoul and Beijing will cooperate to manage the peninsula situation in a stable manner. He also called for China's constructive participation in preventing additional provocations by the North.

Minister Wang revealed some differences in the assessment of the peninsula situation. According to the Chinese foreign ministry, Wang said that the peninsula largely remains at peace with effort from all involved countries, which has provided the environment needed for the development of the two countries and the region.

Wang also said South Korea and China should oppose the negative impact of "decoupling" and maintain global supply chains in a stable manner. The statement is believed to be a rebuke of the U.S.-led Indo-Pacific Economic Framework(IPEF), which is seen as a move to counter China. Seoul is expected to discuss joining the IPEF during the South Korea-U.S. summit on Saturday.

Meanwhile, Park and Wang expressed concerns about the explosive spread of COVID-19 in North Korea. The two sides exchanged opinions on the need to provide humanitarian aid to the North and agreed to continue consultations.
Share
Print
List