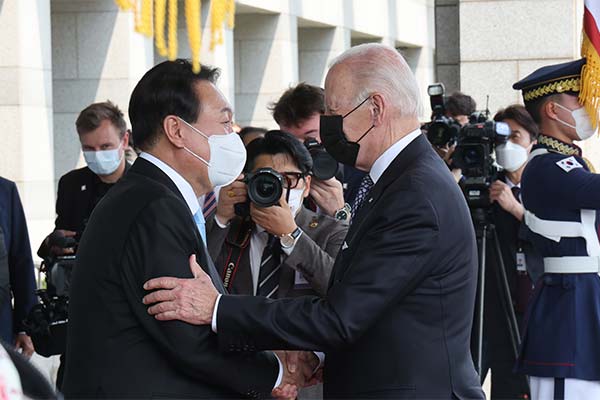 The dialogue consists of a small group meeting, a one-on-one and an extended meeting with several aides attending.

The extended meeting will involve eleven South Korean and eleven U.S. officials including Finance Minister Choo Kyung-ho, Industry Minister Lee Chang-yang and Cho Tae-yong, who has been named ambassador to Washington. From the U.S. side, in addition to Sullivan and Kritenbrink, Commerce Secretary Gina Raimondo and chargé d'affaires of the U.S. embassy in Seoul Christopher Del Corso will join.

The North Korean nuclear issue, economic security and regional cooperation are expected to top the agenda.

Strengthening the extended deterrence will likely be a focus amid speculation of an impending ICBM or nuclear test by North Korea.

Discussions are also expected on supply chains and technological cooperation, including on chips and batteries.

After the talks, Yoon and Biden will hold a press conference and announce the outcome of their meeting in a joint declaration.

In the evening, an official banquet will be held at the National Museum of Korea attended by the two presidents and key government and business officials.

A presidential official said that First Lady Kim Keon-hee will briefly greet President Biden ahead of the state dinner, but won't attend the event.

On Friday, shortly after arriving, he visited a Samsung semiconductor plant in Pyeongtaek, Gyeonggi Province, with Yoon.

On Sunday, Biden, alongside Yoon, will visit the Korean Air and Space Operations Center in Osan, Gyeonggi Province, wrapping up his three-day visit to Korea. He will then leave for Japan.
Share
Print
List