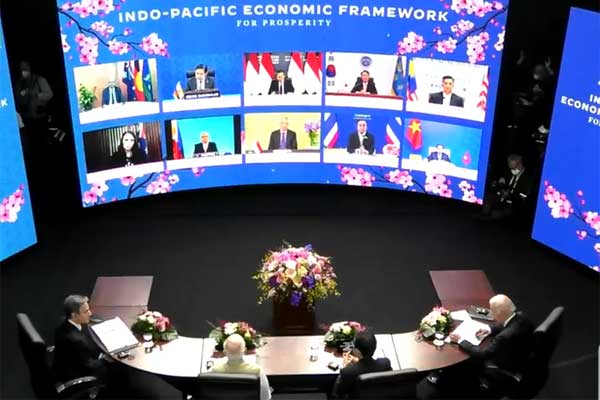 President Yoon Suk Yeol has made official Seoul’s participation in a new U.S.-led economic framework for the Indo-Pacific region as he attended a virtual summit initiating the multilateral regional bloc.

Yoon took part in the Indo-Pacific Economic Framework(IPEF) summit on Monday afternoon, where a total of 13 countries, including the U.S., South Korea, Japan, Australia, New Zealand and India, were declared as inaugural members of the new entity.

Seven member states of the Association of Southeast Asian Nations(ASEAN), including Indonesia, the Philippines, Singapore and Vietnam, also joined.

President Yoon earlier on Monday told reporters that the IPEF was a rules-setting process for trade in the Indo-Pacific region, differentiating it from a trade pact with specific "contents". He said it only made sense that South Korea should participate, adding that not doing so would only mean significant losses for the nation.

The new South Korean leader had already expressed his intent to join the IPEF during a joint press conference following his summit with U.S. President Joe Biden in Seoul on Saturday.

The IPEF is aimed at strengthening cooperation between the U.S. and its allies in the Indo-Pacific region, but is also widely seen as Washington's campaign to keep China's growing regional clout in check.

The presidential office denied that Seoul intends to exclude any particular country with its bid to join the framework, adding it is focused on stabilizing the impact of global supply chain disruptions on South Korea.
Share
Print
List