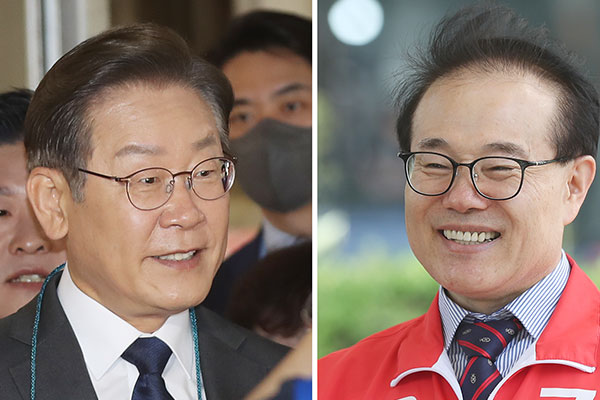 With just a week left until the June 1 local elections and parliamentary by-elections, a new poll finds that candidates of rival parties for a parliamentary seat in Incheon are in a tight race.

According to the latest KBS poll of eligible voters in the relevant electoral districts, 42-point-five percent of the respondents favor Lee Jae-myung, former presidential candidate of the main opposition Democratic Party(DP), while 42-point-seven percent support Yoon Hyung-sun of the ruling People Power Party(PPP).

The gap of zero-point-two percentage points was within the margin of error.

When asked which candidate is most likely to win in the Gyeyang-B District in Incheon, 44-point-eight percent chose Lee, while 38-point-two percent picked Yoon.

In the race for the parliamentary seat of the Bundang-A District of Seongnam, south of Seoul, Ahn Cheol-soo of the PPP was ahead of Kim Byoung-gwan of the DP 56-point-one percent to 28-point-two percent.

More than 63 percent of the respondents said Ahn is likely to win.

The approval rating of the ruling party was largest among political parties in both of the electoral districts.

The poll, conducted by Hankook Research on Monday and Tuesday, has a confidence level of 95 percent with a margin of error of plus or minus three-point-five percentage points.