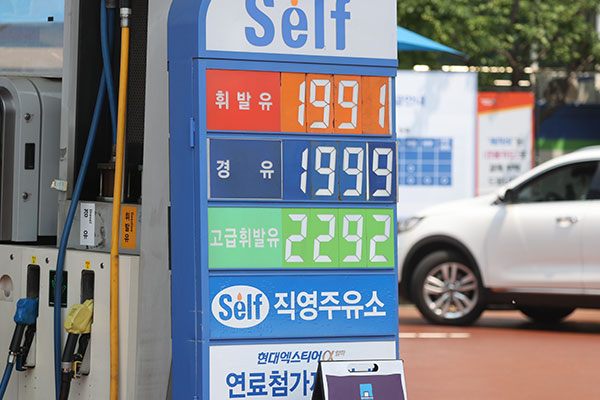 Fuel prices continue to rise due to tight global supply caused by Russia’s invasion of Ukraine.

According to Opinet, a website run by Korea National Oil Corporation (KNOC), the average gasoline price in the country stood at two-thousand-one-point-01 won per liter as of 2:30 p.m. on Thursday, up two-point-42 won from the previous day. The average diesel price also stayed above two-thousand won per liter.

It’s the first time that prices of gasoline and diesel in Korea both exceeded two-thousand won per liter.

The gasoline price topped the two-thousand won mark on March 15 for the first time in over nine years. It dropped below the level in April before bouncing back.

KNOC data show that the consumption of gasoline and diesel in April shrank 18-point-three percent on-year to a combined 17-point-35 million barrels.

An official at the Korea Petroleum Association forecast that fuel prices will likely continue to climb for the time being amid fluctuating international oil prices, unless the imbalance between supply and demand improves.
Share
Print
List