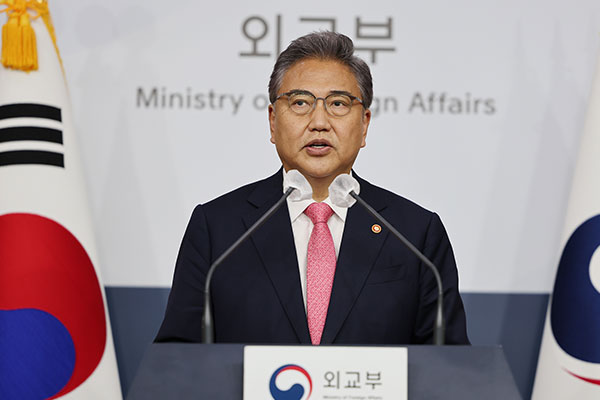 The top diplomats of South Korea, the U.S. and Japan have strongly condemned North Korea's recent ballistic missile launches and urged the regime to return to the negotiation table.

Foreign Minister Park Jin, U.S. Secretary of State Antony Blinken and Japanese Foreign Minister Yoshimasa Hayashi made this call in a joint statement on Friday released by the U.S. State Department. The move is seen as unusual as the statement is not the product of any kind of meeting.

The three sides vowed to strengthen trilateral cooperation toward the complete denuclearization of the Korean Peninsula and full implementation of UN Security Council resolutions.

They stressed their continued openness to meeting with North Korea without preconditions.

The diplomats also expressed regret over the UN Security Council's failure to adopt a resolution in response to the North's blatant and repeated violations of UNSC resolutions, despite support from 13 council members.

They reaffirmed their commitment to step up coordination with the international community to urge Pyongyang to cease its unlawful activities and engage in dialogue.

The allies added that a path to sincere and sustained dialogue remains open and asked North Korea to return to negotiations.
Share
Print
List