Parties Agree on Extra Budget Ahead of Local Elections 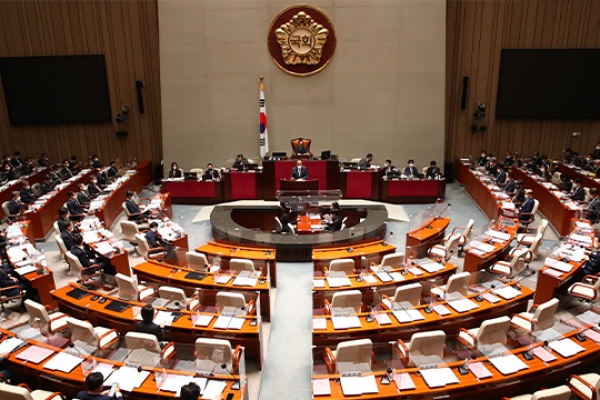 Rival parties have reached an agreement on this year's second extra budget aimed at compensating small merchants and self-employed people hit by the COVID-19 pandemic.

The agreement was reached on Sunday morning in a meeting of the floor leaders of the ruling People Power Party (PPP) and the main opposition Democratic Party (DP) with the mediation of National Assembly Speaker Park Byoung-seug.

The parties agreed to hold a plenary parliamentary session at 7:30 p.m. Sunday to pass the extra budget bill, which is expected to be put to a vote at around 10 p.m.

The government's original proposal was a budget of 36-point-four trillion won, but the latest agreement is expected to increase the amount by two-point-eight trillion won to 39-point-two trillion won.

The agreement would adjust the ceiling for annual sales eligible for the compensation to five billion won from three billion won, paying six million to up to ten million won for each of three-point-71 million small merchants and self-employed people.

As for legal compensations for losses, the parties agreed to expand the eligibility to include medium-sized businesses with annual sales of up to three billion won, raising the minimum payment from 500-thousand won to one million won.
Share
Print
List