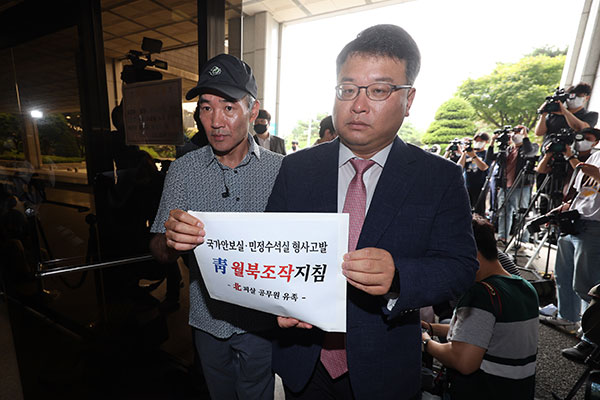 The family of a fisheries ministry official killed by the North Korean military near the western sea border in September 2020 has filed complaints with the prosecution against former Moon Jae-in administration officials.

The three former presidential officials are accused of preventing government officials from doing their jobs, abusing their power and falsifying official documents.

The family urged the prosecution to investigate whether the defense ministry and the Coast Guard had followed the Moon administration's guideline to promote the assumption that Lee had attempted to defect before being shot to death.

They urged the prosecution to conduct the probe itself rather than transferring it to the Corruption Investigation Office for High-ranking Officials(CIO), stressing that the current CIO chief was appointed by the Moon government.

The family will look into filing a direct complaint against the former president should the main opposition Democratic Party reject their request to seek the release of relevant classified documents sealed away at the Presidential Archives.
Share
Print
List