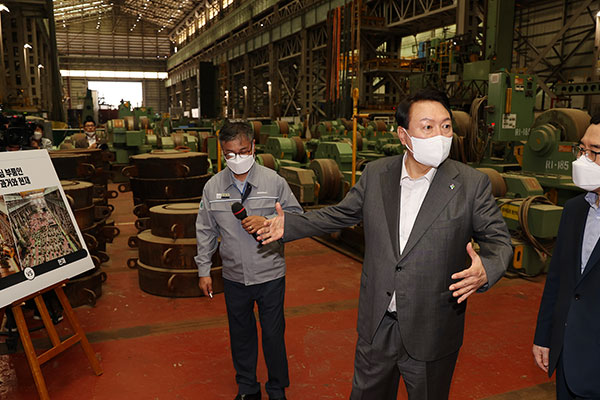 Yoon made the remarks during a visit to Doosan Enerbility, a key player in the country’s nuclear power industry, in the southeastern city of Changwon on Wednesday.

Noting that Korea’s nuclear power plants are recognized for their world-class technology and stability, the president said the country's unrivaled competitiveness in the global market lies in its ability to build power plants on time and on budget.

He also said the door to the nuclear power plant export market is wide open, since countries such as Saudi Arabia, the Czech Republic, Poland and the U.S. may recognize nuclear power as a major energy source in the course of pursuing carbon neutrality.

Yoon made it clear that his government will discard the nuclear phase-out policy of the previous Moon Jae-in administration and resume construction on two nuclear reactors that had been suspended under the Moon government.

Yoon promised to provide active support to the nuclear power sector in order to quickly put the industry on track and breathe new life into factories in Changwon, the center of the country's nuclear power ecosystem.
Share
Print
List