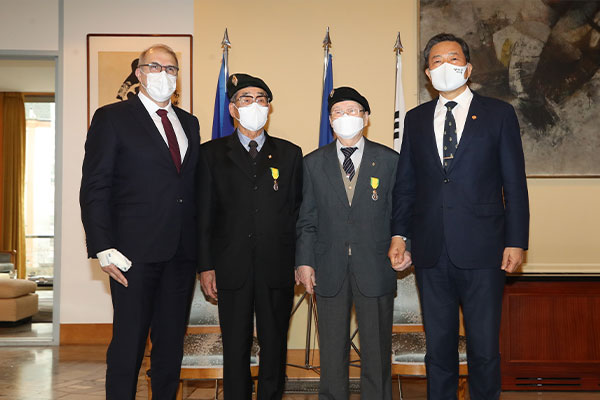 Two South Korean war veterans who fought alongside French troops in the Korean War will be awarded the National Order of the Legion of Honor, the highest French order of merit.

The French Embassy in South Korea said on Wednesday that Ambassador Philippe Lefort will present the medals to Park Dong-ha and Park Mun-joon on Monday in a ceremony in Seoul.

The two men enlisted as volunteers on December 30, 1950 and served for nearly four and a half years.

They were assigned to a French unit on February 11, 1951 and fought alongside French troops for more than two years, including in the decisive Battle of Chipyong-ni, often referred to as the "Gettysburg of the Korean War.''

The embassy said the two veterans became eligible to receive the National Order of the Legion of Honor after receiving France’s Order of Military Merit in March of last year.

France sent some 34-hundred troops to fight in the Korean War. Two-hundred-62 were killed and seven went missing while around one-thousand were wounded. The remains of 46 French soldiers lie at the UN Memorial Cemetery in Busan, South Korea.
Share
Print
List