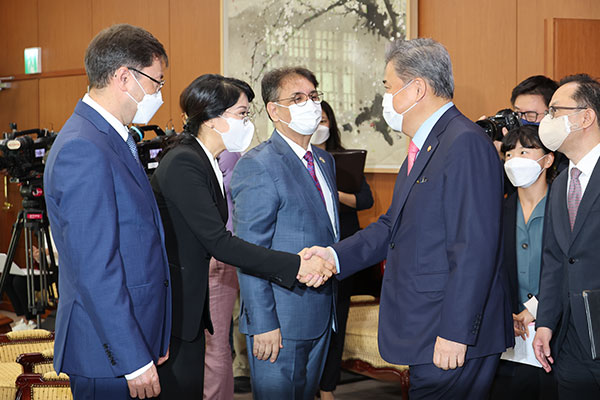 Foreign minister Park Jin called for shared foreign policies and enhanced cooperation with five Central Asian countries as Seoul marks the 30th anniversary of diplomatic relations with each of them.

Meeting with the ambassadors of Kazakhstan, Uzbekistan, Turkmenistan, Tajikistan and Kyrgyzstan on Thursday, Park said the Yoon Suk Yeol administration seeks to become a global leader that contributes to liberty, peace and prosperity.

Stressing the importance of cooperation with Central Asia in the process of achieving such a goal, Park proposed expanding high-level exchanges and promoting mutual understanding between people from the respective sides.

The minister also sought Central Asia's support for the bid by the southeastern port city of Busan to host the 2030 World Expo.

The ambassadors, for their part, congratulated Seoul's successful launch of the Nuri space rocket, or the KSLV-II, earlier this week. They also expressed gratitude for the Yoon government’s acknowledgement of the importance of cooperating with the region.

On North Korea, the ambassadors endorsed Seoul's efforts to secure peace and stability on the Korean Peninsula.
Share
Print
List