New US Ambassador to Arrive on July 10 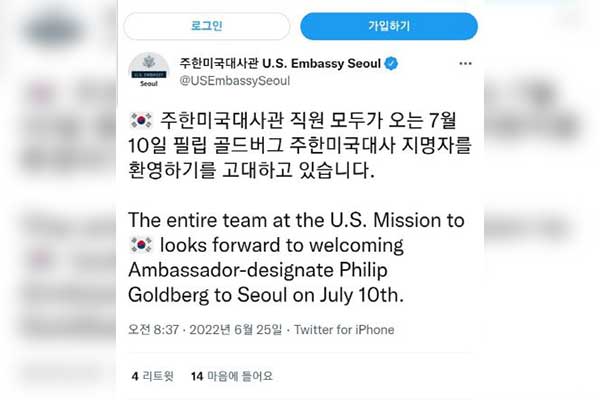 Philip Goldberg, the new U.S. ambassador to South Korea, will arrive in Seoul on July 10.

The U.S. embassy tweeted Saturday that the entire team at the U.S. Mission to the Republic of Korea looks forward to welcoming Ambassador-designate Philip Goldberg on July 10.

This comes two months after the nominee was confirmed by Congress on May 5.

According to the Twitter page of the U.S. State Department's Bureau of East Asian and Pacific Affairs, Goldberg also attended a meeting of heads of mission held in the U.S. on Friday.

Under the Obama administration, he worked as a State Department coordinator for the implementation of UN Security Council resolutions on North Korea.
Share
Print
List