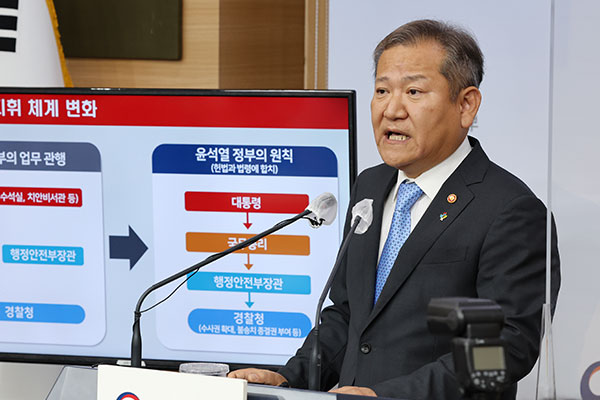 Interior minister Lee Sang-min announced plans to swiftly establish a new division within his ministry that will oversee the operation of the national police.

At a press conference on Monday, Lee said his ministry will accelerate the implementation of an advisory committee's recommendation to set up the new unit and to draw up regulations regarding the police commissioner general's command authority.

The minister said a final plan will be devised by July 15 and relevant regulations will be made afterward. The new unit could launch sometime next month, 31 years after the Korean National Police Agency separated from the former Ministry of Home Affairs as an independent agency in 1991.

The interior ministry said that with the abolishment of the office of senior presidential secretary for civil affairs that handled police matters, the Yoon Suk Yeol administration will authorize its interior minister to oversee the police in accordance with the Constitution and the law.

As for criticism that the new unit could violate police neutrality and autonomy, Lee said all members of the police force must stay politically neutral and that a system is in place to prevent the minister and the police chief from exercising undue influence over the investigation.
Share
Print
List