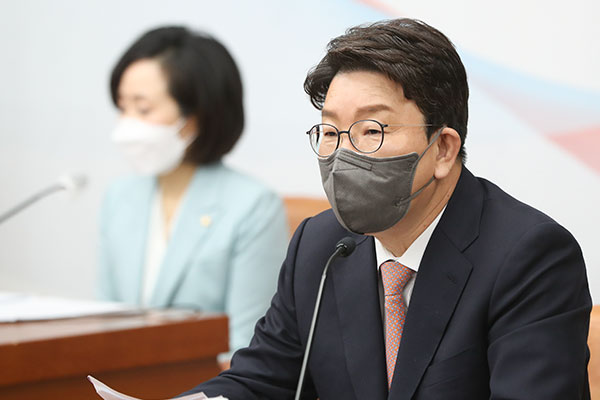 Kweon made the remarks on Tuesday in reference to the Democratic Party's(DP) planned request to the National Assembly for an extraordinary session, a move that would enable the party to unilaterally form standing committees for the second half of the 21st National Assembly.

Emphasizing the prolonged vacancy of the parliamentary speaker position for the term's second half, the floor leader added that the Assembly has never convened a plenary session without bipartisan agreement.

Criticizing the DP for tying preconditions to the concession of the Legislation and Judiciary Committee chairmanship, Kweon accused the main opposition of attempting to block the government's every move through its majority in parliament.

Kweon, who is scheduled to leave the country Tuesday night to attend the inauguration of President-elect Ferdinand "Bongbong" Marcos Jr. of the Philippines as a presidential envoy, said continuing negotiations with the DP before his departure would be inappropriate as there is no chance of an agreement.
Share
Print
List