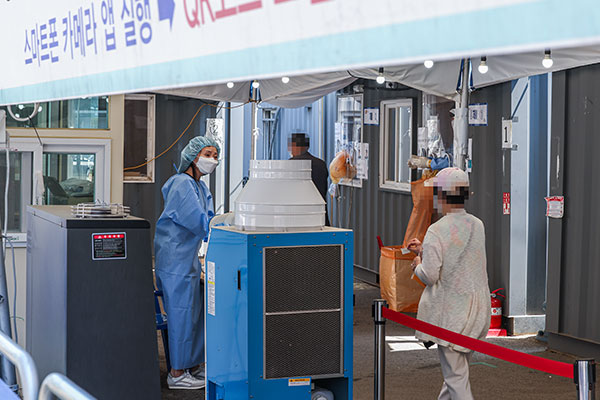 Daily new COVID-19 cases in South Korea bounced back to exceed ten-thousand on Wednesday while imported cases surpassed 200 for the first time in five months.

The Korea Disease Control and Prevention Agency said on Wednesday that ten-thousand-463 infections were reported throughout the previous day, including 205 from overseas, bringing the total caseload to 18 million-349-thousand-756.

The daily tally increased by nearly 15-hundred from a week ago. It marks the first time overseas infections surpassed 200 since 219 such cases were registered on February 1. Eased entry regulations following the lifting of social distancing rules and an increase in international flights are presumed to have caused the uptick in imported transmissions.

Seven additional deaths induced by the pandemic were reported, raising the death toll to 24-thousand-537, while the overall fatality rate stands at zero-point-13 percent.

The number of seriously or critically ill patients receiving care at medical facilities is down by three from the previous day at 59.

About five-point-seven percent of ICU beds earmarked for critical and serious COVID-19 patients are in use, while the occupancy rate at treatment centers handling patients with mild symptoms is under seven percent.
Share
Print
List