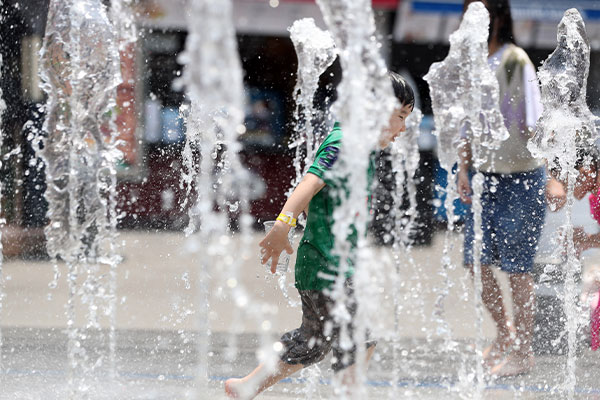 The monsoonal front that inundated the nation's central region with around 300 millimeters of precipitation the past three days has moved up towards North Korea.

As the rains subsided, a heat wave struck most areas around the country and it is projected to continue through the weekend.

The Korea Meteorological Administration(KMA) said on Friday that heat wave warnings were issued for the southeastern city of Daegu and surrounding North Gyeongsang Province. Advisories were issued for others, including Seoul and the capital region.

Daytime highs are forecast to range from 28 to 35 degrees Celsius in most major cities, and mercury levels in some parts of North Gyeongsang are expected to surpass 35 degrees.

Meanwhile, Typhoon Aere, the year's fourth typhoon, is making its way towards the Korean Peninsula.

At around 9 a.m. Friday, Aere formed over waters 760 kilometers south-south-east from Japan's Okinawa. The typhoon, traveling north-north-eastward at 13 kilometers per hour is forecast to reach waters near Jeju Island by Tuesday. It is expected to bring heavy rain to the island and the southern regions.
Share
Print
List